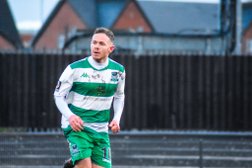 Farsley Celtic progressed to the second round of the FA Trophy after defeating Altrincham 2-1 at the J. Davidson Stadium.

Extra-time was required in the replay, however a Nathan Cartman double saw Farsley edge out Altrincham and earn a home tie with National League side Barnet in the next round.

Farsley gaffer Adam Lakeland was delighted with the win, as he said: “It’s an absolutely unbelievable win, the players were absolutely incredible.

“I said it after the game on Saturday that I felt we were unfortunate not to have gone through, we didn’t get any luck and we knew it would be a different game here, it would suit them more.

“I felt from a defensive point of view we managed to restrict them and reduce them to very, very few clear-cut opportunities, I think they got in three times.”

Lakeland went on to single out Elliot Wynne who made a number of crucial saves throughout the game, adding: “I’m really delighted for all the players, but in particular I’d probably have to highlight Elliot (Wynne), he made an error on Saturday which has been well publicised, against his old club, which hurt him. He’s made some big saves for us tonight, and I’m really pleased for him because he’s a smashing lad, great attitude.”

In contrast to Saturday’s game it was Farsley who took the early lead, breaking the deadlock less than four minutes in. Will Hayhurst’s corner was flicked on by Dave Syers to Nathan Cartman who was lurking in the six-yard box and stooped to head home.

Cartman almost scored an audacious second in the opening knockings, as he diverted Dave Syers’ effort onto the crossbar with a backheel.

The hosts then began to dominate the game as they went in search of an equaliser, with Elliot Wynne forced into an excellent save low down from Jordan Hulme.

Farsley were forced to play on the counter, but were able to regularly trouble Tony Thompson in the last 15 minutes of the first-half. The Robins’ shot-stopper comfortably saved efforts from Cartman and Spencer either side of a tremendous save from Will Hayhurst as he closed down the angle and saved with his legs.

However, the Altrincham equaliser came less than a minute after the restart as Jordan Hulme broke clear of the Farsley defence and calmly slotted home for his third goal across the two games.

The hosts almost took the lead immediately, as Jordan Hulme laid the ball off to Josh Hancock inside the box who struck inches wide of the upright.

Around the hour mark Tom Peers had another fantastic opportunity to edge his side in front as he raced through one-on-one with Wynne, who stood strong and made a crucial stop.

The hosts failed to capitalise on their second-half dominance, and with Luke Wall failing to touch home Hancock’s effort at the death, extra-time was required to separate the sides after 180 minutes of football.

Elliot Wynne made two tremendous saves in the first 10 minutes of extra-time to keep the scores level, firstly pushing away Peers’ strike before he flew across his goal to tip a superb strike from Max Harrop around the upright.

And Altrincham were left to rue their missed chances when Nathan Cartman struck again as Jimmy Spencer, battling on after pulling up chasing a ball down, was able to guide the ball back across to Cartman who turned and finished from close range.

The woodwork came to Farsley’s rescue in the 119th minute as Altrincham were somehow unable to scramble home an equaliser, with the Celt Army surviving to progress to the second round of the FA Trophy for the first time since the club reformed.