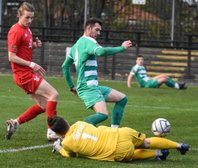 Farsley Celtic are back in action on Tuesday evening as Adam Lakeland’s side entertain Chester at the Citadel.

This game will take place behind closed doors, but you can register to watch our live stream for just £5 HERE.

Farsley Celtic:
The Celt Army continued their unbeaten run at the Citadel on Saturday with a 2-2 draw against Kidderminster, making it four games without defeat at home in the league to start the season.

It is now just one defeat in five for Farsley, but Adam Lakeland will be hoping to start turning those draws into victories after also picking up just one win in those five games.

Joel Byrom continues his recovery from the injury sustained against Fylde in October, whilst Connor Heath made his debut from the bench on Saturday after joining on dual-registration terms from Nantwich.

Chester:
Chester returned to action for the first time since the end of October on Saturday, drawing 1-1 away to Brackley Town.

After winning their first two games of the season, the Seals have won just one of their last four games, however, they remain 10th in the division having picked up 10 points from six games.

They have no apparent injury concerns, whilst Joel Taylor’s suspension will kick-in next Saturday after his dismissal against Brackley.

Last meeting:
There was just one meeting between the clubs last season, with Chester running out 2-1 winners at the Deva Stadium.

After a goalless first-half, Bradley Jackson put the hosts in front less than a minute after the restart, before George Waring doubled his side’s lead.

Farsley pulled a goal back when Paul Walker was felled in the box and Will Hayhurst converted from the spot, but the Seals were able to hang on for all three points.