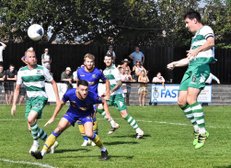 Farsley Celtic slipped to a third defeat of the season as King’s Lynn Town ran out 2-1 winners in sweltering heat at The Citadel.

The searing heat, indicated by drinks breaks in either half, didn't have an enormous impact on the game as two of the league's new sides put on an engaging show for the Bank Holiday crowd.

Mistakes at the back allowed King’s Lynn to take a 2-0 lead into the interval as Alfie Payne and Michael Gash struck and, despite Will Hayhurst’s second-half penalty, Farsley were unable to snatch a point.

Farsley Celtic Manager Adam Lakeland was disappointed with the defeat, as he said: “We haven’t lost the game because of a lack of effort, there was a lack of quality at times, and the goals we conceded in the first-half are errors.

“I think the first-half was very open, both sides had chances, they arguably had the better ones, but we could have been 2-0 up at half-time, it was a bit of a crazy game.

“They’re a good side, they’re very effective and good at what they do, they’ve got some very good players and get around their nine very well, and they’ve got great energy in midfield.”

After an open start to the game, King’s Lynn were the first to fashion a clear-cut opportunity when Adam Marriott let fly from 25-yards out, with Elliot Wynne forced to tip the ball onto the crossbar and to safety.

Farsley then had an excellent chance of their own to break the deadlock, Will Hayhurst whipping in a superb cross for Adam Clayton who leapt highest but couldn’t keep his header down.

The woodwork came to the Linnets’ rescue midway through the first-half, Jordan Richards swinging in a dangerous cross from the right that was diverted against the upright by a visitors’ defender.

King’s Lynn then took the lead against the run of play on the counter, despite the best efforts of Celt Army shot-stopper Elliot Wynne. Adam Marriott played an excellent ball through to Sam Kelly who was denied one-on-one by Wynne, before Ben Atkinson failed to clear his lines and Alfie Payne slotted home.

Just five minutes later the Linnets doubled their lead, capitalising on Farsley once more giving the ball away as Michael Gash curled home from the edge of the box.

The early period of the second-half was a scrappy affair, however 10 minutes after the interval Farsley came close as Jimmy Spencer cut in from the left before firing just wide of the target.

Just a minute later Elliot Wynne had to be at his best to prevent King’s Lynn from adding a third, getting a hand on Alfie Payne’s strike and pushing it onto the crossbar and out of play.

An hour in Farsley found a route back into the game, Dave Syers starting a quick counter before he was fouled just inside the box, with Rory McAvley then appearing to strike Syers, which went unnoticed by the officials.

Will Hayhurst converted the spot-kick, tucking the ball under Alex Street to halve the arrears.

Farsley pushed for an equaliser in the remaining moments, with Jack Higgins being pushed further up the pitch, but despite long spells of pressure were unable to fashion a clear-cut opportunity.