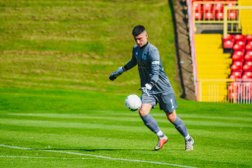 David Syers’ late strike wasn’t enough for Farsley to take anything from the game, as an Ashley Hemmings strike and Jordan Hulme brace saw the Robins to victory.

A disappointed Adam Lakeland said: “I thought there were moments in the game really that had a big bearing on the score line, at 0-0 Jimmy (Spencer) has had a header from six-yards out, put it wide, and within a minute they’ve put one in the top corner.

“It’s a very difficult place to come when you’re behind here, they’re a good side and I actually felt in the remainder of the first-half we kind of got to grips with them.

“Our shape and our organisation was a bit better, and we had a lot more possession until the break, but we didn’t really create anything of note.

“The players are disappointed, they’ve had, certainly 18 months of winning pretty much every week, and when they lose, they don’t like it, as does nobody.”

After a quiet start to the game Farsley had an excellent chance to break the deadlock a quarter of an hour in, Nathan Cartman playing a terrific ball into Jimmy Spencer who could only guide his head back across goal and wide.

Within a minute Farsley were left to rue that missed chance as Altrincham took the lead when Ashley Hemmings collected the ball 25-yards from goal and curled a terrific strike past Elliot Wynne.

Spencer then had a chance to draw his side level, Nathan Cartman working the ball out wide to Jordan Richards, but Spencer headed the right-back’s cross wide.

Just two minutes into the second-half the hosts had a chance to double their lead when they were awarded a penalty as Jordan Hulme went down under a challenge from Jack Higgins. However, Elliot Wynne got down well to his left to excellently save Sean Williams’ spot-kick.

Altrincham had a couple of half chances as Yusifu Ceesay and John Johnston had efforts blocked, but after the hour mark they struck for a second time as Jordan Hulme got free in the box and headed home from six-yards out.

Just minutes later the Robins extended their advantage and all but secured the three points, Hemmings holding the ball up well for Hulme to rifle home from inside the box.

Adam Lakeland then made a triple substitution as Dave Syers, Ben Atkinson and Danny Ellis were introduced, and the Celt Army struck back with eight minutes remaining as Syers got across his man at the near post to head home Jordan Richards’ cross.

With a minute of normal time remaining another excellent opportunity to get back in the game was squandered with Jordan Richards playing a clever ball through to Jimmy Spencer who fired the ball across goal, but there was no one there to turn it home.

Despite the late resurgence Farsley were unable to find a way through the Altrincham defence for a second time, as the Robins held on to secure all three points.