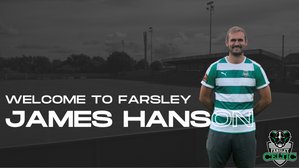 James Hanson Signs for the Celts

We are delighted to announce the signing of experienced striker James Hanson.

The former Bradford City man has spent over a decade in the Football League, eight years of which were with the Bantams, before he most recently plied his trade for Grimsby Town.

In his time at Valley Parade, Hanson was a member of the 2012/13 League Two promotion-winning squad, scoring at Wembley in the play-off final as Northampton Town were defeated 3-0.

After signing for the Celts, Hanson said: “As you get a bit older you’re looking for somewhere a little bit closer to home. For the last three or four years, I’ve been driving long drives every day which hasn’t helped with injuries, so I made the decision in the summer that I wanted somewhere within an hour of home.

“Farsley fitted perfectly, I knew the assistant really well, Bettsy, and I knew three or four of the players anyway, so when I came here to train a couple of weeks ago I really enjoyed it.

“I enjoyed the gaffer’s ideas, the way he is with the squad and the team spirit that he likes to build, and you could tell that there’s going to be a really good chance of a good season.

“It’s a tight-knit group with great lads, so I’m really looking forward to being a part of it.”

Adam Lakeland added: “We’re delighted to capture a player of James’ quality, he’ll certainly make us stronger that’s for sure.

“If we’re being honest, James should still be playing in League Two, and there was interest in him from clubs in League Two and the National League, but the key for James was being closer to home.

“He now gives us some fantastic attacking options. I already believe we have one of, if not, the best number nines in the league in Jimmy Spencer, and now adding James into that we’ve probably got two of them.

“The pair of them will certainly be a real handful for defenders to play against, and obviously it gives us a number of different ways which we can play.

“if we’re going to try and improve on our 11th place finish last season then we probably do need to score more goals, and hopefully James is someone who can come in and do that.”

Everyone at the club would like to welcome James to Farsley!