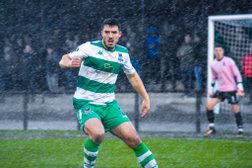 After making his debut in the draw with Hereford at the end of November, Matt Regan has been settling into life at Farsley.

The defender joined the Celt Army from Curzon Ashton, and counts Tamworth, Northwich Victoria and Stalybridge Celtic amongst his former clubs.

Farsley haven’t lost a game since the ex-Liverpool defender has joined the club, and he has started the last two games.

On his move across the Pennines, Regan said: “I decided to join Farsley after speaking with Adam (Lakeland) as he was my old manager at Northwich, so we have a good relationship and it was a good opportunity to join a team doing well.

“I played against Farsley earlier this season which was tough to take as we conceded two goals late on, but it’s easy coming in to see the lads here don’t stop, as shown against Hereford in my first game for Farsley.

“All the lads have been sound; I’ve really enjoyed my first few weeks at the club. The only player I knew before joining was Jack Higgins when we played together at Stalybridge. He did have hair then though so that was a few years ago!”

Regan, who is comfortable at both left-back and centre-back, also outlined what he can bring to the squad, as he added: “I hope to bring a good attitude and commitment to helping the club wherever I’m needed, as I’ve already shown I can play in numerous positions, but playing at the back would be my preferred position as shown when we had a good win over Halifax.

“The FA Trophy along with the Christmas schedule is always something you look forward to. With this week being a cup competition, it is always mentioned that it ends at Wembley, and why not aim for that?

“I don’t really have any personal ambitions for this season, but I think just coming in for a few weeks it’s obvious to see we can make a real good run at the play-offs and who knows from there!”