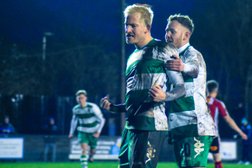 Farsley will be making the trip across the Pennines on Tuesday evening to face Altrincham in an FA Trophy replay.

Form guide:
Farsley Celtic – Saturday’s 2-2 draw with Altrincham extended the Celt Army’s unbeaten run to six games in all competitions, with the last defeat coming a month ago to Boston United.

Adam Lakeland’s side will be hoping for an improvement on their last visit to the J. Davidson Stadium, when the hosts ran out 3-1 winners in August. However, Farsley do possess the second-best away record in the National League North, having picked up 17 points from 11 road games.

Altrincham – The Robins have now gone four games without a win in all competitions, with Saturday’s draw following defeats to Portsmouth (2-1), Stalybridge Celtic (2-0) and Bradford Park Avenue (2-0).

Despite their lengthy FA Cup run this is the first home cup game for Altrincham this season, who have possessed an excellent record at the J. Davidson Stadium. The Robins have collected 17 points from their seven home games, losing just once.

Team news:
Farsley Celtic – Danny Ellis, Elliot Wynne and Tyler Walton all returned from injury at the weekend, which means Adam Lakeland should have a full squad to select from.

The gaffer’s thoughts:
“It’s another game that probably both clubs don’t need, but it’s a different game at their (Altrincham) place, it really is.

“When we’ve played them here (The Citadel) we’ve given them good games, when we’ve gone there, we’ve found it tough at times, but we’re playing really well at the moment.

“We’re playing really well, we’re performing very well, we’re rotating in the team a little bit and the lads who are coming in are doing great.

“Whilst it’s the Trophy, we’ve got the second-best away record in the league, so we’ve got to go there with some confidence and belief that we can still progress, but it’s going to be tough, that’s for sure.”

What’s at stake:
The winner of tomorrow’s replay will host National League side Barnet in the second round.