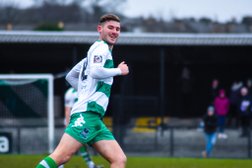 After being out of action for the last two weeks due to the weather, Farsley welcome Hereford to the Citadel this weekend.

Form guide:
Farsley Celtic - Adam Lakeland’s side face Hereford this weekend having lost just one of their last four games in all competitions, and just of their last five game league games as they put a disappointing January behind them.

A 2-0 victory over Blyth Spartans last time out saw Farsley move up to ninth in the National League North, just seven points off the play-off places with a game in hand.

Hereford – The Bulls have endured a disappointing season so far, however on Tuesday evening they earned a fantastic three points as they defeated the league leaders York City 4-1 at Bootham Crescent.

That marked Hereford’s first win since New Year’s Day and followed a run of eight games without a win, and they now sit 17th in the table, 12 points clear of the relegation zone.

Team news:
Farsley Celtic - Josh Barnes has extended his loan deal until the end of the season, so is set to continue in goal, whilst Jack Higgins will be hoping to return having missed the victory over Blyth.

Ellis Hudson came off the bench to make his Farsley debut last time out, whilst Callum Nicell is still waiting to make his first appearance for the club after the weather put paid to the last two games.

Hereford – The Bulls have no apparent injury concerns, so Josh Gowling and Steve Burr should have a full squad to select from.

Farsley thought they had taken in the lead in the first-half after Luke Parkin’s header hit the upright and Nathan Cartman tapped home, but to the surprise of everyone in the ground the goal was ruled out for offside.

Midway through the second-half the Bulls broke the deadlock as Alex Bray teed up Taylor Allen who slotted home.

Alex Bray then had a second Hereford goal ruled out, after it had initially been awarded, with Reece Styche adjudged to have been offside in the build-up.

And then Farsley levelled deep into stoppage time as Will Hayhurst’s cross was touched home by Higgins.

Saturday's game takes place at the Citadel, postcode LS28 5BE. Kick-off is 3pm, and admission prices are just £10 adults, £6 concessions and free for U13s.