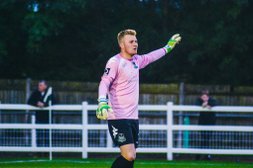 Form guide:
Farsley Celtic – The Celt Army will be hoping to find some consistency with the visit of Kettering Town, following a mixed start to the season which has seen four wins, four defeats and one draw. Adam Lakeland will be pleased with how his side have settled into life at step two, sitting 10th in the division, and head into Saturday’s game on the back of a 3-0 victory over Bradford Park Avenue.

Kettering Town – Kettering Town have had a difficult start to the new season, picking up just five points from their opening nine games. The Poppies defeated AFC Telford United 2-1 on the first day of the season, but have been winless since then and on Tuesday evening they were defeated 2-0 by Boston United. Kettering have picked up just one point in their four games on the road this season, and have conceded 20 goals in total, the second most in the league.

Team news:
Farsley Celtic - Jack Higgins and Elliot Wynne are both doubts after missing Tuesday’s victory over Bradford Park Avenue with injuries sustained in the defeat to Altrincham, whilst Lewis Turner and Nathan Turner remain sidelined.

Kettering Town – Jahvan Vidal returned to the Poppies’ squad on Tuesday evening after recovering from a concussion, however Aaron O’Connor has been told he can leave the club and Michael Richens has been left out of the squad for the previous two matches.

The gaffer’s thoughts:
“Everybody told me that (Bradford) Park Avenue were struggling but they caused us a few issues on Tuesday and stayed in the game until the latter stages.

“There’s no easy game in this division, and we’ve seen that ourselves. We’ve been inconsistent in terms of results albeit we have had a tough run, but that’s gone now.

“You can win two or three games in this league just as easy as you can lose two or three, and by winning a couple you can shoot seven, eight places and the same if you lose a couple, you can drop seven or eight places.

“The league is so condensed, bar a couple of clubs at the top, that the fact Kettering have got off to a not so great start is absolutely irrelevant, it’s all about the players on the day and we’ll fully respect them as we do any opponent.”

The visitors:
Like Farsley, Kettering Town earned promotion to the National League North last season as they won the Southern Premier Division Central by 14 points from King’s Lynn Town. In 2006/07 Kettering and Farsley met in the Conference North play-off semi-finals, with Farsley going on to win promotion after defeating Hinckley United in the play-off final.

The Poppies did earn promotion the following season after winning the Conference North, however in 2011/12 the club went into administration and finished bottom of the Conference, before being demoted to the Southern League Premier Division. Kettering then suffered relegation to step four, returning to step three after promotion in 2014/15 and promotion was once again secured last campaign.

Monday's game takes place at the Citadel, postcode LS28 5BE. Kick-off is 3pm, and admission prices are just £10 adults, £6 concessions and free for U13s.