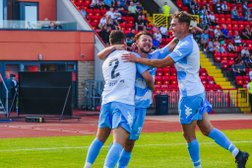 Form guide:
Farsley Celtic – Adam Lakeland’s side will be hoping they can make it three wins in a row with the visit of King’s Lynn tomorrow. The Celt Army have won back-to-back games for the first time in the new season, with victories over Spennymoor Town (1-0) and Gateshead (3-0) moving Farsley on to 10 points and up to seventh.

King’s Lynn Town – Ross Barrows has returned to fitness after playing a reserves game in midweek, and was an unused sub in Saturday’s victory over Curzon Ashton. Therefore, Linnets Manager Ian Culverhouse should have a full squad to select from.

The gaffer’s thoughts:
“It’s all about the players now really, the players have got to go and look after themselves and recover right, which our lads are generally pretty good at.

“We expect a tough game, they’ve had a really good start, they got promoted last year, beating Warrington in the super play-off final, and they’re a good side so we expect a difficult game.

“The application of the players in the last couple of games has been more what I expect, and they’ve obviously gone and got their rewards for that.

“It’s up to them now to continue to output that kind of effort and performance and concentration, and if we do then we’ll give ourselves a chance in any game.”

The visitors:
The original King’s Lynn side were wound up in 2009, and like Farsley Celtic, King’s Lynn Town reformed ahead of the 2010/11 season. Last time out the Linnets finished second, 14 points behind league winners Kettering Town, in the Southern League Premier Division Central. After initially seeing off Stratford Town and Alvechurch, King’s Lynn defeated Warrington Town 3-2 after extra-time in the super play-off final to earn their spot in the National League North.

Monday's game takes place at The Citadel, postcode LS28 5BE. Kick-off is 3pm, and admission prices are just £10 adults, £6 concessions and free for U13s.