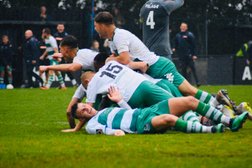 Farsley Celtic shocked Curzon Ashton late on, as goals from Akeel Francis and Will Hayhurst were enough to seal a home victory for the Celts.

It was an even affair for the majority of the game, but Curzon Ashton had the first sniff of goal 10 minutes in when Matthew Regan headed over a Daniel Tricket-Smith free-kick.

Goalkeeper Calderbank-Park was called upon for the visitors 18 minutes later though, as he had to make a quick reaction save to stop Nathan Cartman's close-range header.

On the half-hour mark Curzon Ashton were awarded a penalty by referee James Westgate after Tricket-Smith was brought down in the area. Callum Saunders stepped up to take the spot-kick, but Farsley goalkeeper Kyle Trenerry got across well to make the save to ensure that the half-time score was 0-0.

However, Curzon Ashton did take the lead in the second half, with Tricket-Smith’s long-range strike on 69 minutes silencing the Citadel.

Farsley Manager Adam Lakeland decided to use all three of his substitutions as soon as the goal went in, and his choice paid off on 88 minutes when substitute Akeel Francis was played through one and one, and he made no mistake in poking the ball past an oncoming Calderbank-Park and into the far right-hand corner of the net.

Curzon Ashton saw themselves go a man down as Mohamed Ali was shown his second yellow and a red card, all but ending the visitors' hopes of finding a winning goal.

Farsley pushed on in the little time that remained and they found a winning goal deep into injury time, with Will Hayhurst latching onto a loose ball to fire a shot into the back of the net.

After a difficult afternoon for both sides in the heavy rain, it was the Celts who claimed all three points.

Head Coach Adam Lakeland spoke to us after the game, saying: "We made hard work of it, I wasn't pleased with how we played. It was really cruel on Curzon, certainly with the second goal being so late. It almost took us going behind to start to play and start to ask some questions.

"Once we got level though you could see that they're a side suffering for confidence and losing games. We've got another massive three points today. "

Farsley Celtic are next in action on Saturday 5th October 2019, as they host Southport in the 3rd qualifying round of the FA Cup.