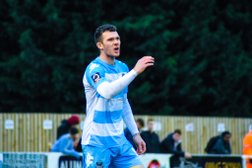 Report: Spirited Celts bow out of FA Trophy in the capital

Farsley’s dreams of an FA Trophy final appearance at Wembley came to an end just four miles from the national stadium, after a 2-0 defeat to Barnet.

It proved third time lucky as the second round replay was finally played at the Hive, having twice been postponed due to pitch problems at the Bees’ home, with last week’s game being called off just minutes before kick-off.

It was the first time Farsley had ever played in London in our 112 year history, but the 2-0 defeat, which saw second half goals from Dan Sparkes and Josh Walker for the National League hosts, didn’t paint a true reflection of the contest.

Barnet did shade the better of the chances in the opening 45 minutes, with Charlee Adams firing wide from the edge of the box, before Jack Higgins cleared the ball off the line to keep Simeon Akinola’s effort out.

However, the Londoners broke the deadlock on 51 minutes with a sneaky free-kick. Sparkes’ low set piece crept under the wall and past Wynne, who would have seen the ball late as it passed the four-man line up in front of him.

Wynne then pulled off a brilliant save on 58 minutes to claw Dan Sweeney’s effort away from trouble which kept Farsley in the contest.

The game, which finished 1-1 in the original clash at the Citadel two and a half weeks ago, could have been headed for the same score line and then extra time, had Jimmy Spencer’s 82nd minute effort found the net.

After a quiet first half, the forward unleashed a terrific shot from the edge of the area which rattled the bar, much to the relief of former England youth team goalkeeper Scott Loach in the home goal.

But as Farsley pushed for an equaliser late on, inevitable gaps were left at the back and Barnet sealed their spot in the third round, where they will face National League leaders Barrow, via a quick counter-attack.

Walker latched onto the end of Sparkes’ low crossed ball to finish coolly past Wynne to finally put the former Football League side through, after three hours of close football between the sides over the two encounters.

Bees boss Darren Curry sportingly came over to thank the Farsley fans who had returned to the Hive, a week after suffering the disappointment of seeing the replay called off at the eleventh hour last Tuesday.

The Celts return to league action with a tricky away trip to Northamptonshire where they will face play-off favourites Brackley Town on Saturday.