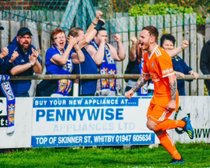 After three seasons at Farsley, Nathan Cartman is set to leave the club this summer.

The ex-Harrogate Railway man initially joined the Celt Army on loan from Darlington in 2017, before making the move permanent in the same year.

Cartman was an integral part of the squad in each of the last three seasons, scoring 45 goals in 128 appearances, including 18 goals in our 2018/19 title winning campaign.

The forward was a favourite with the Farsley supporters and in the dressing room, and alongside his goalscoring exploits was known for his creative play and outstanding work rate.

In our first season back at step two, Cartman made 37 appearances in total, 14 of which were from the bench, scoring eight goals.

“Carts has been superb for us, particularly in his first two seasons. He scored on his ‘loan’ debut against Coalville in my first game at the club and then when we sold James Walshaw to Scarborough we brought Carts back permanently and he scored again on his ‘official’ debut away at Stafford, which is still one of my favourite goals so far as Farsley Celtic manager.

“The biggest compliment I can give him is that when he came in, he improved us as a team. We had to change the way we played when he came in permanently, but we improved as a team, made the playoffs, and the following season he was equally superb when we won promotion.

“Above all he is a great person, honest, humble and hardworking, and I wish him all the very best for the future. He will have clubs lining up for his services I’m sure.”

Nathan Cartman also gave his thoughts on his departure, saying: “I’d just like to thank Adam and his coaching staff for giving me the opportunity to play for the club, and also John Palmer and Josh Greaves for making the deal happen.

“I’ve had three unbelievable seasons, reaching the playoffs in the first year, going one better by winning the league in the second season, and then consolidating our status in the National League North this season.

“The group of players at Farsley deserve massive credit for that, especially this season when things haven’t always been easy. They are first class and it’s been a pleasure to play alongside all of them.

“I have decided to move on for a new challenge, the people who know me will know I just want to play football week in, week out. I want to earn the contract given to me by playing games regularly, so that means it’s time move on.

“I wish the club the very best for the future as there are some top people involved there who have all looked after me during my time with Farsley.”

Everyone at Farsley would like to thank Nathan for his efforts whilst at the club, and wish him all the best for the future.