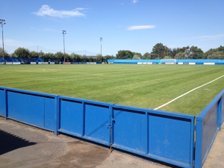 The week ahead at Throstle Nest

A look ahead to a busy few days at Farsley Celtic

After a convincing 4-0 FA Trophy victory over Prescot Cables on Saturday the first team squad return to action tomorrow (Tuesday) Evening, when they face local rivals Ossett Town in the first round of the West Riding County Cup.

On Friday Evening Farsley Celtic Under 18's entertain their counterparts from FC Halifax Town in the 2nd Qualifying of the FA Youth Cup. The side made it through to this stage by beating Knaresborough Town 2-0 in the last round at the Nest, and Halifax will provide another tough test for Mark Jackson's team.

The following day Farsley Celtic return to League action with a home match against high flying Spennymoor Town. Jason Ainsley will bring his side, who currently lie in fourth place to the Nest in a rearranged game, following Burscough's continued involvement in the FA Cup.

And then next Tuesday Witton Albion are the visitors for an Evo-Stik Division One North fixture. Witton, who narrowly defeated Farsley in the FA Cup last month, are currently without a manager since the club dispensed with the services of Scott Dundas last week.