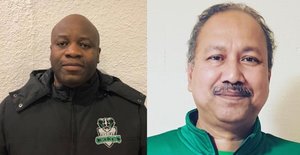 In the last couple of months, two new appointments have been made to our academy staff.

Dyson Dzapasi (left) joins as the Head of Recruitment for our academy and U23 squad, whilst Pathikrit Sarkar (right) is our new Head of International Recruitment and Partnership Development.

Dzapasi has previously worked as a scout for the Leeds United Academy and runs the PYE Football Academy, whilst Sarkar was a professional footballer in India before founding Fast Sports & Management in Leeds.

Farsley Academy Manager Neil Ross is delighted to have both on board, as he said: “Dyson has run a few private academies and he has good connections in local professional clubs as well, so we’ll be using Dyson’s experience and his connections with the pro game, particularly within the Leeds area.

“Dyson’s role is to recruit for the academy, for our BTEC programme, and for the under 23s, in the elite section within Leeds and Yorkshire.

“Pat is in charge of our international recruitment, he’s got experience working in India and around the world, so his role is to bring players from around the world into the academy programme, and also into the under 23s.

“It’s an opportunity for us to put the Farsley brand worldwide and get young players from around the world into our academy set up.”

Ross also discussed the plans for the 2020/21 season, continuing: “We’re now recruiting for the start of the new school team, we’re currently setting up for around 60 players in the academy for next year, around 35 new scholars plus the lads that are going into their second year.

“There’ll be three teams, two college teams and one in the FA Youth Alliance League at U19s level, and then we’ve got the U23s team who’ll be playing in the Monday night football league.”

For those who are interested in joining the scholarship programme, you can head to the following link: https://www.wearescl.co.uk/farsley-celtic, or contact Neil Ross on 07583 168037.