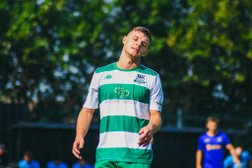 Ahead of our trip across the Pennines to Altrincham, we look at the previous meetings between the sides.

The clubs have met five times in previous seasons, with Farsley yet to win, and the last meeting came in the 2017/18 season as Altrincham went on to win promotion to the National League North.

We take a look at the three most memorable meetings between the two sides:

3. Farsley Celtic 0-1 Altrincham (Saturday 6th January 2018)
After winning the home tie 6-0, Altrincham did the double against a battling Farsley side as they ground out a 1-0 victory.

The crucial moment came with 30 minutes remaining as Daniel Cockerline was shown a controversial red card for a late challenge on Tom Hannigan.

Just three minutes later the visitors capitalised on their advantage, as Jordan Hulme won the ball off Kurt Harris and rounded Graeme McKibbin before slotting home.

The Robins would go on to lift the Northern Premier League title by 13 points, whilst the Celt Army would reach the play-offs before losing to Ashton United.

2. Altrincham 1-1 Farsley Celtic. Altrincham won 4-2 on penalties (Tuesday 14th October 2008)
Altrincham progressed to the third round of the Conference Shield as they edged out Farsley after penalties.

Farsley more than matched their opponents in the 90 minutes, however the hosts broke the deadlock in the second period of extra-time as Warren Peyton curled home a free-kick from 20-yards out.

On the stroke of full-time Farsley drew level as Rory Prendergast’s dangerous cross was headed home by Tom Penford.

However, James Knowles and Dominic Krief both saw their spot-kicks saved as the Robins advanced.

Damien Reeves gave Farsley an early lead, however with 10 minutes remaining in the first-half he was given his marching orders, changing the complexion of the game.

Midway through the second-half the Robins drew level thanks to Colin Little to earn his side a vital point in the battle for survival.

Whilst the season would end in relegation for Farsley, Altrincham were reprieved as Halifax Town folded, maintaining their place in the Conference despite finishing 21st.