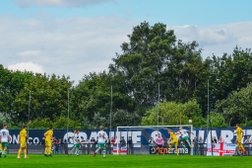 We look back at our previous games against Gateshead.

Farsley Celtic will be looking to make it back-to-back wins against Gateshead on Saturday, and ahead of the fixture we look back at the previous meetings.

The clubs last met in the 2008/09 Blue Square North season in which Gateshead did the double over the Celt Army on their way to promotion via the playoffs.

We take a look at the three most memorable meetings between the two sides:

Farsley Celtic 4-2 Gateshead (Tuesday 13th September 2005)
The first meeting between the clubs of the 2005/06 season saw the visitors’ difficult start to the Northern Premier League season continue as Farsley ran out 4-2 winners.

Braces from Scott Jackson and Rodney Rowe helped the Celt Army to the three points, whilst a Chris Laws strike and Martin Pemberton own goal weren’t enough for Colin Richardson’s side who had won just one of their opening seven games.

Andy Watson broke the deadlock to give Farsley the lead, with Kevin Sanasay, Andy Shields, Roy Stamer and Simeon Bambrook all going on to add to the score.

The season would culminate in promotion to step two for Lee Sinnott’s Farsley side thanks to a 2-1 play-off final victory over North Ferriby United, whilst Gateshead finished in 17th.

Farsley Celtic 4-1 Gateshead (Wednesday 19th December 2007)
After being held to a 1-1 draw at the Gateshead International Stadium, Farsley progressed to the second round of the FA Trophy with a 4-1 victory over Gateshead.

David Southern gave the lower ranked visitors a surprise lead just 10 minutes in, however parity was restored before the interval as Jamie McClen scored an own goal.

The turnaround was completed midway through the second-half thanks to Chris Billy’s strike, before Lee Tuck struck twice late on to secure the win for his side.

The Celt Army would go on to reach the last 16 of the competition after defeating Alfreton Town, however they were ultimately knocked out by York City.