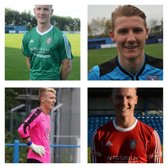 Following the sad news that Celts midfielder Richard Marshall had to retire at the back end of 2017 with a hip problem, Farsley have been hit with a second retirement this season as young ‘keeper Jake Lofthouse has now had to hang up his gloves.

Jake joined Farsley in 2014 as understudy to then first-choice goalkeeper Tom Taylor, having previously been part of the Academy and youth sections of Bradford City, Guiseley AFC and Harrogate Town as well as playing representative football for the West Riding County FA.

He made his debut for the Celts in April 2015 in the EVO-STIK First Division North at Throstle Nest against Kendal Town in a game that finished 3-2 to the visitors and in the following season contested the number one jersey with now Scarborough stopper Tom Taylor.

At the start of 2016/17 campaign he signed dual registration with NCEL Premier Division side, Harrogate Railway Athletic. Then with a change of management at Station View, Jake returned to Throstle Nest at the back end of 2016. However, that season was cut-short for him as Jake underwent surgery on the hip that has ultimately forced him to retire.

Jake did though battle back at the start of this current campaign to play for the Celts in their friendly fixtures against York City and Eccleshill United, before signing on dual-registration with Farsley tenants, Albion Sports of the NCEL Premier Division.

Speaking about the events leading to the decision Jake said: “I saw the specialist on Tuesday and from the scan nothing had changed and that the next thing they advised would be a hip replacement, which isn’t ideal. I’ve spoken to lads in the game who I respect and trust and they all said the same thing, that long term health is more important than playing and therefore retirement was realistically the only decision.”

Looking back on his playing career, Jake added: “The highlights would be playing against some of the biggest teams in the country at youth level and coming into the semi-pro game, and the promotion last season is up there amongst the best moments.”

Of his time at Throstle Nest, he said that the high points included, “playing with a good set of lads, from the first season I signed, and even more so now I’m at Albion. Of course, the promotion and County Cup triumphs were good, but the lads I’ve played with have made the last number of years memorable.

“I’ve agreed to play until the end of January so that Albion can sort out another keeper. After then I’m not too sure what the future holds to be honest. I’ll pop and watch a game or two, but longer term it might be coaching I look at, but to be honest I’ve not really thought about it.”

Gary Stokes Farsley’s goal-keeping coach said of the news: “It's always sad when a player has to retire through injury. For the second time in recent weeks we are losing another of our own.

“As goalkeeper coach at Farsley I have worked with some great ‘keepers over the years. Jake was in his second spell at the Club and, although he was on loan at Albion Sports, he still showed a lot of potential. He had great physique, was agile and was very quick across the ground. He learned much from Tom Morgan and Tommy Taylor in his time and was developing well.

“It was a shame when the injury first came. However, after the operation, and with the help of Gaz Liversedge, we thought we had him back to somewhere near. He went to get games in at Albion as the latest stage of his development. Unfortunately, it has not worked as expected and I am gutted for him at the outcome. A great lad who, I believe could have gone on to better things. I would like to thank him for his hard work and for being part of a long line of good goalkeepers during my time at the Club.”

Celts current first-team ‘keeper Graeme McKibbin said of his former training partner: “Jake is a good lad and a very good ‘keeper. He always put 100% into training and when working with him, we always had some laughs. Mrs. Lofthouse also made him the nicest diluting juice for training nights which he would share out! I’m gutted for Jake, but wish him well in whatever he decides to do either in or out of football.”

Everyone at Farsley Celtic would like to thank Jake for his contribution to the Club on and off the pitch and wishes him all the best for the future in whatever he decides to do.