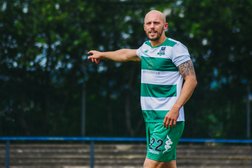 Farlsey Celtic were handed their second pre-season defeat after losing 3-1 away at National League side Harrogate Town.

It was a steady game to begin with, even as both sides were cancelling each other out. But the hosts broke the deadlock on 36 minutes when Joe Leesley’s low driven strike from the edge of the box found the bottom left hand corner.

The Celts however had a good opportunity to equalise just before half-time as they were awarded a free-kick 20-yards out from goal, but Town goalkeeper James Belshaw saved Will Hayhurst’s effort comfortably to ensure Harrogate went into half-time a goal up.

Six minutes into the second half Harrogate doubled their lead after Celts centre-back Jack Higgins slotted the ball into his own net. And five minutes later Town were awarded a penalty when Jonathan Stead was brought down in the box. Stead took and scored from the spot, sending goalkeeper Elliott Wynne the wrong way.

Farsley pulled a goal back on 63 minutes though through Jack Higgins who scored a header from a corner, redeeming himself from his own goal earlier in the game,

Harrogate Town pressed for more goals and came close on 71 minutes when substitute Brendan Kiernan's cross from the right met fellow substitute George Thomson five yards out, but his header was saved well by Wynne.

The closest the home side came to a fourth goal was when Kiernan's effort bounced out off the inside of the post ten minutes from time. Harrogate however managed to hold on and win 3-1, handing the Celts another defeat.