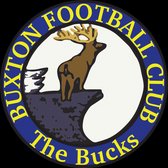 The Celts played the Bucks in the 1973/74 season, when Farsley travelled to Silverlands in the FA Cup First Qualifying Round on Saturday 15 September 1973. The Derbyshire club won the tie 1-0.