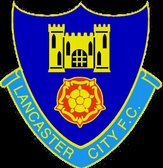 After a promising start to the encounter, Farsley ended up having to come away with a share of the spoils in a lively contest at the Giant Axe.

Farsley started the game the brighter of the two sides and Paul Walker played the ball in to Jon Lewis after 15 minutes, only for the on loan striker to have his effort chalked off for offside. Walker was looking lively up front and almost had the ball to Lewis again, but saw his cross well blocked by Mike Hale in the Lancaster goal. Jon Lewis then broke free of the City defence, only for a heavy touch to let him down and allow the ball to find its way to the goalkeeper.

Farsley opened the scoring on 24 minutes, as their domination finally paid off. Lewis Nightingale's corner failed to beat the near post, but the clearance only found its way to Kyle Harrison at the edge of the box. The centre-half turned his man and drilled an unstoppable shot into the bottom left corner.

Neil Stevens had another chance for Farsley, before the home side were gifted an equaliser. James Riley attempted a back pass to Tom Taylor in the Farsley goal, only for it to go straight to Joe Whittington who rounded Taylor and levelled the scoring after 35 minutes. Things got worse for the Celts on the stroke of half time. The defence failed to clear a Lancaster attack and Billy Akrigg gave the hosts the lead with a shot into the top left of Taylor's goal.

Farsley came out for the second half looking to salvage something from the match, and it was Lewis who went close again with a chipped effort to the back post that went agonisingly over the crossbar.

On the hour mark Lancaster were reduced to ten men. Ross Daly picked the ball up in midfield, and Jacob Davis made a challenge over the top of the ball with his studs showing leaving the referee no option but to dismiss the player. Farsley had 30 minutes to make their man advantage count, but couldn't quite gain a clear cut opportunity other than another Lewis effort from a Walker cross that was well saved.

Into the final few minutes of the game Aaron Hardy and Robbie O'Brien combined down the right hand side to get a teasing ball into the box. Walker couldn't quite make the ball, but it struck the unfortunate Garry Hunter and went in for a Farsley equaliser.