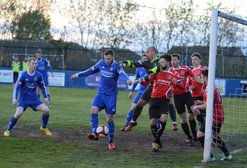 The Club can confirm that Aiden Savory has left the Celts to join Scarborough Athletic.

Although his time with the Celts will predominantly be remembered for his striking role, during last season Aiden fitted seamlessly into the back four for the majority of the campaign. He made 53 league and cup starts and one appearance off the bench last season and despite a change in playing role still contributed 8 goals. The last of those was the crucial opener in the 4-0 Play-Off Semi-Final win over Colne at Throstle Nest.

Aiden originally made his name on the West Yorkshire non-league circuit with Ossett Town and Bradford Park Avenue before moving over to Australia for a spell. He returned to the UK in early 2013 and joined Goole AFC before linking up at Avenue again. However, he became available at the start of the 2013/14 close season and was snapped up by Neil Parsley, finishing as top scorer with 19 goals in his first campaign with the Celts.

Of his time with the Club, Aiden said, “First of all I would like to thank everybody at Farsley Celtic for the support during my time there. I felt at home from day one and I’ve loved every minute of the four years spent at the Nest. I really can’t speak highly enough of the Club.”

“Having been at the club since 2013 and presented with a new challenge by Scarborough, I felt it was the right time to move on. After promotion last season it’s good to be able to leave on a high. However, in all honestly it was a really tough decision to leave.”

“I’m sure with the new management team in place and the great squad that is being assembled, the Club will continue to be successful.”

“There are so many wonderful people at the Club, but I’d personally like to thank Rob Winterbottom for everything he does for the Club and the lads and of course his sponsorship of me during my time with the Celts.”

“I’d just like to wish everyone associated with Farsley all the best for the future.”

Manager Adam Lakeland said of the departing player, “I’m disappointed to learn that Aiden has decided to leave the Club. He played a key part in the team’s success last season, filling in at centre-back and has served the Club well for several seasons.”

“We would have liked him to stay with us for the coming campaign, but I respect his reasons for leaving and wish him all the best for the future.”

Everyone at Farsley Celtic thanks Aiden for his contribution down the years at the Nest and wishes him all the best next season with The Seadogs.