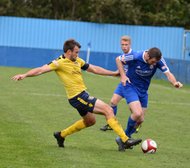 Andy Dales was excellent as Mickleover defeated the Celts.

Farsley Celtic were put to the sword by an excellent Mickleover Sports side who were extremely comfortable in their 3-0 win.

On an extremely wet and windy afternoon at Throstle Nest, the Celts were unable to find their rhythm, whilst Mickleover carved through the Farsley defence at ease.

Mickleover came racing out of the blocks and caught Farsley off guard in the opening moments to take an early lead as Pablo Mills beat Danny Ellis in the air to head home from John McGrath’s corner.

McGrath then came close to scoring himself shortly after, however his curling effort was well held by Graeme McKibbin.

Mickleover continued their assault on the Farsley goal with Andy Dales making a great run as he skipped past stationary Farsley defenders before firing wide.

Farsley started to find their feet and came inches away from equalising as McGrath came to Mickleover’s rescue, clearing James Walshaw’s header off the line after he latched onto Danny Ellis’ header.

Mickleover moved back onto the front foot with Jak Hickman the next to come close, as his strike from a tight angle was saved by McKibbin.

James Walshaw had another chance for Farsley as he was played in by a delightful through ball from Ben Atkinson, only to fire into the side netting when well placed.

McKibbin was then forced into action twice as he saved well to deny first Jimmy Phillips and then Euan Garnett, with Farsley fortunate to only be a goal down at the interval.

After a quiet start to the second half James Walshaw once again was agonizingly close to levelling the scores as he received the ball from Isaac Baldwin, his strike deflected inches over crossbar.

Mickleover then doubled their lead with 15 minutes remaining as Farsley’s defence allowed Euan Garnett to ghost in behind and he rounded McKibbin before slotting home into an empty net.

The three points were wrapped up for the visitors as Tevahn Tyrell found Andy Dales who slotted home, with Farsley’s defence seemingly falling asleep once again.

Luke Parkin did have the ball in the goal for Farsley in the final ten minutes after being played in by James Walshaw however he was adjudged offside by the assistant referee.

Mickleover could have made it four late on as Jak Hickman delivered a pinpoint cross to the unmarked Tevahn Tyrell who somehow headed wide, however Mickleover were still able to comfortably take the three points.