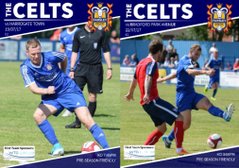 The Celts played two games this week as the start to the 2017/18 EVO-STIK season looms ever nearer. Farsley boss Adam Lakeland reflected on the games at the Nest which saw the Celts win 3-1 in midweek against Harrogate Town and then draw 0-0 on Saturday against Bradford Park Avenue.

Looking at the two games, Adam said: “It’s been a positive week for us with two solid performances against teams from the division above. Harrogate weren’t at full strength during the week; however I felt we were the better team throughout that game and thoroughly deserved the win.

“BPA put out a stronger side on Saturday and presented an alternative challenge in the style of football they played to Harrogate, so it was a different test for us, but one which I feel we came away from with plenty of optimism. They had three trialists in for the first- half, but second-half they were pretty much full strength so for us to compete with them as we did and restrict them to very few goal-scoring opportunities was pleasing.”

The Farsley manager continued: “I was particularly happy with the way in which we defended in both games, but most especially against BPA. We looked really organised, held good shape and in the latter stages when a few of our lads were running on empty we kept our discipline. We didn’t get ragged and ultimately kept a clean sheet - hopefully the first of many. Avenue only really had a couple of clear cut chances which were second phase from set-plays, but in open play we were solid throughout.

“I felt the first- half was very even with both teams playing some good football, but not really hurting one another. The second-half when they went stronger and brought fresh legs on they started to dominate the ball and with the heat on Saturday it was physically demanding on our players, but we held firm and got a credible draw to cap what’s been a good week of preparation for us.”

In relation to how the squad is shaping up ahead of the league action, the Celts boss said: “We’ve let two or three lads who we’ve been looking at in pre-season go and have currently got a couple more in to look at in the next week, but in general I don’t see us doing too much more with the squad at this stage.”

Finally looking ahead to the game at the Nest on Saturday 29 July, Adam outlined the squad’s schedule: “We now have another week of training ahead of our final home friendly against Ossett Albion. We will continue to work hard this week and will have another three sessions before that game, so hopefully we can work on a few things on the training ground and put in another good performance next weekend.”