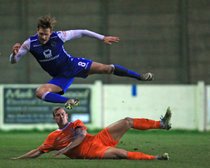 Lakeland: “We have scored three goals against Ashton, Workington and now Buxton in recent weeks, three very good teams and drawn them all which is something we are all disappointed about.”

Post-match reaction as Celts share the points with the Bucks

The Celts came away with a 3-3 draw at Buxton on Saturday, in another nail-biting encounter, as Farsley levelled the game through Adam Priestley in injury time. It completed a unique hat-trick of three-all draws, coming on the back of games at the Nest against Aston United and Workington.

Following the draw in Derbyshire, Celts boss Adam Lakeland said: “Buxton is not an easy place to go and they have had some good results of late so we expected a difficult game and that’s exactly what it proved to be, but to score three goals again, play so well and only come away with a point is a little bit frustrating. That’s been our issue of late, drawing too many games, and it’s not as if any of them have been 0-0. We have scored three goals against Ashton, Workington and now Buxton in recent weeks, three very good teams and drawn them all which is something we are all disappointed about.”

Looking at the game overall, the manager added: “We knew they would put us under pressure in the opening stages, certainly from set-plays and it was disappointing to concede from a corner so early on, but the response by the lads was great, getting back level through a Ryan (Watson) penalty. I was pleased with the performance in the first half and felt we’d get to half time at 1-1, but then the referee gives a bizarre decision for their penalty and it was a blow. I don’t understand what Isaac (Baldwin) could have done. The lad shoots just two yards away from Isaac, whose arm is by his side in a natural position and the referee gives a handball. I’ve seen it back and it’s another decision by an official which has cost us.

“Second half I felt we were the better team throughout. Buxton had a couple of chances on the break whilst we were pushing to get an equaliser and Kyle (Trenerry) made two excellent saves to deny Hardy and Wilson, who I have to say are the liveliest front two we have come up against so far this season. They give their side an edge and are a constant threat. We dominated the ball for long periods, they dropped into a back five, not the first team to go so negative at home against us this season, and we had to be patient in possession to find ways of breaking them down. We had opportunities to score through Chris Atkinson, Isaac and Wakka (Paul Walker) before Wally (James Walshaw) scored after great work down the left by Isaac, who was excellent on Saturday. At that point, I felt we would go on and win the game, however we made an error for their third goal, losing the second ball in midfield too cheaply and they took the lead again. We changed system and threw Danny (Ellis) up-front, playing Adam Priestley off the left and it worked, with us deservedly grabbing a stoppage time equaliser. I am pleased with the performance and effort of the players once again, but feel aggrieved to have only come away from Buxton with a point.”

In looking at the season as the Celts reach the halfway mark, the Farsley boss said: “Going forward we have to do better defensively, but I don’t feel as if we are all over the place, it’s just fine margins, lapses of concentration and individual errors which are costing us at the moment, but I have confidence that we will improve this side of our game. It’s finding the balance which is key, offensively we always look a threat and we are dominating for long periods in games, but conceding soft goals are damaging our results. We’ve only actually lost once in our last 13 games over 90 minutes, which was to Mickleover, so in terms of our form we are going quite well and have shown our character, resilience and qualities on a regular basis, now we need to turn these draws into wins and we will be fine.

“I am hoping to add at least one new player to our group before we travel to Stafford next Saturday. I have been looking to add one or two bodies, but we have such a tight group here that it’s vital we bring the right characters into the football club who buy into the way we work, play and do things. I want players with hunger and enthusiasm who will strengthen us further and hopefully we can do that before