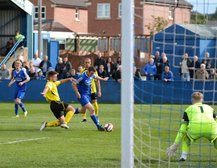 Lakeland: “We should all be pleased with our work in the opening ten games of the season.”

Farsley boss on Celts double over the Yeltz

The 3-1 win on Saturday over Halesowen Town saw the Celts complete a highly satisfactory week at Throstle Nest, following as it did on from the 3-0 win on Tuesday night over Grantham Town. Having beaten the Yeltz earlier in the season 2-1, Farsley completed their first win ‘double’ of the season, moving the Celts up to second-spot level on points with leaders Warrington Town, whilst it left Halesowen rooted to the bottom of the EVO-STIK Premier Division table.

A rightly proud Farsley boss Adam Lakeland looked back on the week and said: “At the start of the week we set ourselves the challenge of getting six points from these two home games so for the players to have delivered that is great and exactly what they’ve deserved.”

In terms of the Halesowen game on Saturday, Adam had the following observations: “I felt we started the game, certainly in the opening 20 minutes, a bit sloppy to be honest, making some individual errors which gave Halesowen chances to score which was disappointing and fortunately they didn’t punish us. With the ball we were a little pedestrian and didn’t really play at the tempo I wanted us to, but the first time we went through the gears we scored, an excellent team goal finished by Ryan (Watson) and shortly afterwards Scooby (Richard Marshall) made it 2-0 with another well worked goal.

“We started the second half well and forced their ‘keeper, who I have to say was outstanding, into two excellent saves, one low to his left from Ryan and the other up to his right from Wally (James Walshaw). We had further opportunities to extend our lead and I felt if we had made it 3-0 we would have won the game by a bigger margin. The sending off evened the contest up and meant we had to play the final twenty-five minutes with 10 men for the second time this week. Shortly afterwards they scored - a poor goal for us to concede, and that gave Halesowen a chance of getting a result. We had to re-organise and compose ourselves again, which we did, and when Wally scored to make it 3-1 we finally put the game beyond them and got the result we thoroughly deserved.”

On the sending-off of Adam Clayton in the second-half, the Celts manager said: “At the time I wasn’t sure if the referee had got it right as it was quite a distance from us in the technical area, but having watched it again, he made the correct decision. Overall I thought the referee was very poor on the day, but it was the one big decision and he did get it right. It’s disappointing from our side as we now have Jimmy (Pollard) unavailable on Tuesday and Adam (Clayton) unavailable against Barwell, but on the positive it was a major boost for Danny (Ellis) to get through 90 minutes and it goes to show just how important every member of the squad is.”

Overall though the Celts boss was pleased with the outcome on the day adding: “It’s great to see the midfielders weighing in with goals in recent games, with Ryan, Ben (Atkinson), Scooby and Wakka (Paul Walker) all contributing, which gives us goals from all areas, making us a real threat to teams.

“I think we should all be pleased with our work in the opening ten games of the season and to have accumulated 20 points gives us a great platform to build on. We have another difficult game at Altrincham on Tuesday and as a squad we look forward to the challenges the upcoming games will bring.”