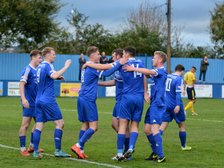 A cracking game at Throstle Nest saw Farsley and Ashton share the spoils.

Farsley Celtic and Ashton United played out an enthralling and end-to-end game which ended in a 3-3 draw, despite the conditions, with Farsley fighting back from 3-1 down.

With Farsley trailing 3-1 it was left to a sensational Adam Priestley strike and last-minute James Walshaw penalty to rescue a point for the hosts, with Ben Atkinson and Ashton’s Matthew Chadwick also scoring terrific goals earlier in the game.

The game got off to a flying start and James Walshaw should have given Farsley an early lead as he was played in by Luke Parkin, with his effort saved by Carnell before he failed to find the target with the rebound.

However, it was Ashton who took the lead courtesy of a rocket from Matthew Chadwick, the striker cutting in from the right wing and firing a terrific strike into the top left corner.

Within minutes Ashton had doubled their lead as Jack Dyche raced in behind the Farsley defence and slotted home past Graeme McKibbin.

The visitors should have gone 3-0 in front immediately after as Mark Lees’ long-range strike crashed against the crossbar, the ball then dropping to Matthew Chadwick who headed wide when it seemed easier to score.

The Celts were soon back in the game though as the lively Ben Atkinson hit a splendid effort from 30 yards past the outstretched hand of Ashton ‘keeper David Carnell and into the top corner.

Chadwick then had an opportunity to restore The Robins’ two-goal advantage as he curled just wide of the upright after receiving the ball from Liam Tomsett.

Early on in the second-half Matthew Chadwick did restore Ashton’s two-goal lead as the visitors were awarded a soft penalty, Chadwick slotting home to make it 3-1.

Farsley almost got straight back in the game as Parkin squared the ball to James Walshaw who was somehow denied as David Carnell made a great save from point blank range.

With just over ten minutes remaining Farsley were given hope by substitute Adam Priestley. The ball dropped to the Gibraltar international from a corner and he shifted the ball onto his right foot and curled a tremendous effort into the top corner, which no goalkeeper could have saved.

Ashton should have secured all three points with time running out through Matthew Chadwick, who cut inside and struck an effort which seemed destined to nestle into the bottom corner, only for the ball to thump against the bottom of the post and bounce away to safety.

The visitors were left to rue their missed chances as in the fourth minute of stoppage time Farsley were awarded a penalty following a foul on James Walshaw. Walshaw dusted himself down to convert the spot-kick and secure a hard earned share of the spoils for the Celts.