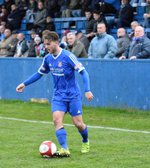 Parkin: 'Every game in this league is a hard game and tomorrow will be no different'

Striker looks ahead to tomorrows fixture at Buxton

Forward Luke Parkin has been a regular in the Celts starting line-up over the last few weeks and has found himself on the score sheet too. He looks forward to tomorrow's game with Buxton as Farlsey look forward to getting back to league action following their win in the County Cup at Brighouse on Monday Evening.

'It was definately good to get back to winnings way on Monday in the County Cup. The pitch wasn’t the best, and they made it difficult for us at times in the first half but we got the result in the end with a decent second half performance'

'I have had to be patient to get a starting birth in the team, but I have done over the last few weeks, and I have been happy with my performances. I have worked hard on the training pitch and I have been really happy with the amount of games I have been playing. My target for the next few months has to be staying in the team week in week out and helping us get as many points as possible. To Get a few more goals would be nice also!'

'Since I’ve come in to the team it’s been really enjoyable to play with some of the players, and I feel in the recent games I have linked up well with Wally and Wakka and hopefully that can continue. It’s also good to play with players I’ve played with before like Ben Atkinson and Ryan Watson. They are all good players'

'We had a really good session last night and we are prepared for a tough test against Buxton tomorrow. Every game in this league is a hard game and tomorrow will be no different, I am looking forward to it and I’m sure the boys are too'