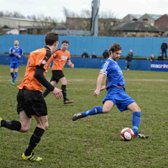 During last season, Peter made 28 league and cup starts for the Celts, with a further 12 appearances off the bench, scoring 2 goals during the campaign. The first was at Ossett Albion in the Integro League Cup First Round, and his second of the season coming against one of his old clubs Scarborough Athletic in the league encounter at Queensgate.

On his time at the Club, the midfielder said, “Last season was a memorable one. Our aim at the beginning of the campaign was promotion, which was achieved in beating Ossett Town in the Play-Off Final. We had great runs in the FA Cup and FA Trophy, with the victory at Tamworth simply superb. We also managed to win the County Cup which was an added bonus. All the boys at Farsley are spot-on and I see no reason why they can’t challenge at the top of the league next season.”

He continued, “I spoke to the new manager a few times and he offered me a deal. I just thought with the amount of extra travelling etc. that I just couldn’t commit. I wish Farsley all the success in the future. It’s a great Club with excellent staff behind the scenes.”

Celts manager Adam Lakeland responded, “I sat down with Peter last week about what I’m looking to do here moving forwards. I made it clear that I think he is a very good player, someone who played a lot of games in the success the team experienced last season and that we wanted him to stay with the Club for the coming campaign.

“We made him an offer which both the Club and myself agreed was fair, which was the same deal as last season, but with the requirement for Peter to train with the squad more than was expected under the previous management team. Peter asked for more money if he was to do this and I didn’t feel it was feasible.

“The agreement Peter had in place last season was by no means Peter’s fault, I must stress that, but equally it isn’t mine and I have to do what I think is best for the Club going forwards. I wish him well for the future.”

All at Farsley Celtic thank Peter for his contribution during the highly successful 2016/17 campaign and wish him all the best next season with The Brewers.