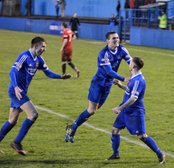 Altrincham are the latest visitors to Throstle Nest.

We have no pressure and nothing to lose
Adam Lakeland

Farsley Celtic will be looking to continue their fine recent form as league leaders Altrincham make the trip across the Pennines to Throstle Nest. When the two sides met at the J. Davidson Stadium, Altrincham thrashed the Celts 6-0 with Josh Hancock scoring twice, and further goals from Thomas Peers, John Johnston, Jordan Hulme and Thomas Hannigan.

Farsley head into the game on a four game unbeaten run, rising up to 6th in the Evo-Stik Premier Division just three points behind second placed Workington. Farsley drew with Rushall Olympic (1-1), whilst defeating Campion (3-2), Whitby Town (2-0) and most recently title challengers and Yorkshire rivals Shaw Lane (4-2). The Celts will be without the services of Adam Clayton who limped off injured against Shaw Lane, and could miss up to three weeks. Lewis Turner will also serve a one-match suspension following his dismissal against Whitby, whilst Chris Atkinson will play his last game before a two-match suspension. Ahead of the game Celts’ manager Adam Lakeland said, “I’m incredibly proud of the way the team has played not just on Monday coming back against a good side, but over the past week or so in general. We now look forward to welcoming Altrincham to the Nest at the weekend in what will be a difficult game, but one in which we have no pressure and nothing to lose.”

The visitors Altrincham have been flying high all season, and are seven points clear atop the division with two games in hand on second placed Workington. The Robins had been on a 16-game unbeaten run at the end of 2017, without a defeat since a 1-0 reversal to Shildon in the FA Cup on 16th September. However, that unbeaten run crashed to an end on New Year’s Day, with Witton Albion running out winners in a 4-3 thriller, William Jones scoring the decisive goal in the 88th minute. They have no apparent injury concerns, and new signing Andy White will be available after making his debut against Witton.

The game takes place on Saturday at Throstle Nest, postcode LS28 5BE. Kick-off is 3pm and admission prices are just £8 adults, £5 concessions and £1 U16s. See you there!