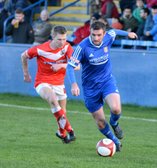 Farsley make the trip to Staffordshire.

Farsley Celtic travel to Stafford Rangers on Saturday as both clubs look to get back to winning ways. This is the first meeting between the two clubs since Farsley reformed, the last time a Farsley side played Stafford was eight years ago in August 2009.

Farsley are without a defeat in three games, drawing in the league with Workington (3-3) and Buxton (3-3), whilst progressing to the West Riding County Cup quarter-finals after a 2-0 win over Brighouse Town. Four of The Celts' last six matches have now finished 3-3 after 90 minutes. Farsley are without a win in five league games, their last win a 2-0 victory at home to Nantwich Town on the 7th October. New signing Lewis Turner is in contention to make his first appearance for the club, the ex-Harrogate Town player and twin brother of Farsley midfielder Nathan officially joining the club this week. Ahead of the game Farsley manager Adam Lakeland said "We’ve only actually lost once in our last 13 games over 90 minutes, which was to Mickleover, so in terms of our form we are going quite well and have shown our character, resilience and qualities on a regular basis, now we need to turn these draws into wins and we will be fine."

Stafford Rangers currently sit 12th in the Evo-Stik NPL, five points behind Farsley with a game in hand. Stafford had been on an excellent run of just one defeat in ten, with impressive victories over Ashton United (1-0), St Ives FC (6-0) and Farsley's FA Trophy conqueror South Shields (3-1). However they were brought back down to earth on Tuesday with a crushing 4-0 defeat at home to lowly Rushall Olympic. They have no apparent injury concerns.

Tomorrow's game takes place at Marston Road, postcode ST16 3UP. Kick off is at 3pm and admission prices are £10 adults, £7 concessions and £1 U16s. If you can't make the game you can follow it on Twitter with @FarsleyCelticFC.