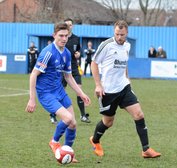 Farsley Celtic travel to Workington tomorrow evening looking to make it three consecutive wins and continue the push for the playoffs.

When the sides met at Throstle Nest in November the game ended in a controversial 3-3 draw as Workington scored a 96th equaliser. James Walshaw hit a hat trick for the Celts, with Connor Tinnion, Scott Allison and Matthew Douglas on target for the Reds.

Farsley enter this game firmly in the playoff hunt in fifth position, and this is the third game in a run of six games in 13 days. The Celts have lost just one of their last eight games, a 4-1 loss to Stourbridge. Prior to that Farsley had defeated Stourbridge (2-1), Stafford Rangers (1-0), Sutton Coldfield Town (1-0) and Matlock Town (2-1), and since the defeat they are three games unbeaten following a draw with Nantwich Town (1-1) and victories over Whitby Town (4-0) and Stalybridge Celtic (4-1).

Forward Nathan Cartman has hit form just at the right time with five goals in his last two games, however on the injury front, Ryan Watson, Isaac Baldwin, Lewis Turner and Kurt Harris are all doubts.

Ahead of the game Farsley Manager Adam Lakeland commented, “It’s real testament to the players and staff to be in this position with six games to go and although we know how difficult the upcoming games will be, we are relishing each and every one of them.”

Workington have had a slip in form in recent times with just one win in their last five, and they now lie 10th in the division, 11 points behind the Celts with just one game in hand. That sole victory came over Lancaster City (2-0), whilst they have drawn with Warrington Town (1-1), and lost to Mickleover Sports (1-0), South Shields (5-1) and most recently Buxton (4-2). They have no apparent injury concerns.