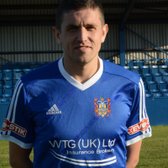 Midfielder Ross Daly has left the Celts to join Scarborough Athletic after playing an important role in Farsley’s West Riding County FA Cup and Play-Off Final successes. He made 37 starts and 19 appearances from the bench last term.

Dales had a brief loan spell at Farsley during the 2012/13 season, but moved permanently in October 2013 after leaving Bradford Park Avenue. Ross has also previously had stints at Thackley.

The midfielder was a popular figure at the Club and in 2015/16 was second in the Supporters Club Player of the Year and picked up the Dominic Fleming Club Ambassador of the Season Award that year.

Celts boss Adam Lakeland said, “It’s disappointing that Ross has chosen to leave Farsley. He has been a great servant to the Club for a number of years and despite making him an offer to be part of the group again for the coming season, he has chosen Scarborough.”

He continued, “I would have liked Ross to stay with the Club and he knows that, but the offer he was made by Scarborough was considerably more than his deal here last season and was something we refused to match. There are no hard feelings and I like everyone at Farsley wishes him all the best for the future.”

All at Farsley Celtic thank Dales for his contribution down the years at the Nest and wish him all the best next season with The Seadogs.