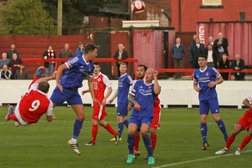 Lakeland: "Picking up points on the road in this division is difficult and to have four points from our opening two fixtures is pleasing."

The Celts first away outing of their 2017/18 EVO-STIK Premier campaign on Tuesday night saw them grab a point in a 1-1 draw at Ashton United through a second-half James Walshaw penalty.

Manager Adam Lakeland gave his reaction after the game at Hurst Cross.

“It’s never easy away at Ashton and coming into it we anticipated a tough game and probably would have been pleased with a point. However, after the way in which we performed in the first 45 minutes there is a frustration there that we haven’t come away with all three points. We created half a dozen clear cut chances and didn’t capitalise on them which is disappointing as we really should have been well out of sight at half time.

“It was only natural that Ashton came out and performed better in the second half as they are a good outfit with a lot of experience at this level and credit to them for changing shape at half time as their performance was much improved after the break. I think they edged the second half and we struggled to get a foothold in the game, probably until they scored actually, when I felt we grew back into the game, played some good football and started asking questions of them again. It did get a bit edgy towards the end with both sides trying to win it. We had a great chance where Wally (James Walshaw) headed wide and they went closer still when Graeme (McKibbin) had to make a point blank save to deny them from a header with the rebound also hitting the bar.”

The Celts boss though was full of praise for the spirit of the side in their performance on the night stating: “It would have been a crime if we’d lost the game so credit to the players for once again coming from behind to get a result and showing real character as other teams would have felt sorry for themselves and got beaten 2-0 or 3-0.”

However, he also felt that perhaps Farsley didn’t entirely get the rub of the green during the ninety minutes, adding: “I thought a number of decisions went against us on the night and we should have had two penalties. In the first half Nathan Cartman was hacked down twice in the area and in the second there was a clear handball blocking a shot towards goal. It summed up what I felt was a poor night for the referee who missed and called a number of things wrong in my opinion. Nevertheless, picking up points on the road in this division is difficult and to have four points from our opening two fixtures is pleasing. We now move on to another difficult away game at Halesowen on Saturday.”

Looking at the squad ahead of that trip to the West Midlands, the Celts boss reported: “Danny Ellis pulled up with a calf problem, so he will need assessing on Thursday once it has settled down. The good news is that Ryan Watson and Jordan Deacey will be pushing to be involved on Saturday if they come through training on Thursday unscathed and Nathan Turner is edging closer to a return to full training which gives us further options for the coming fixtures. We have a very strong squad and everyone will play their part throughout the course of the season. The lads who have come on in these opening games have made a real impact and that’s what we are looking for from the players on the bench.”