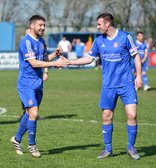 Wakka Signs on for New Season

Attacking midfielder Paul Walker has put pen to paper on a new deal for the coming Evo-Stik Premier Division season. Walker who made 57 appearances for the club in 2016/17 signed a new deal with the club on Tuesday evening.

'Wakka' has been virtually ever present in the stating eleven since joining from Bradford Park Avenue, initially on loan, early in the 2015/16 season. He weighed in with ten goals last campaign as well as numerous vital assists.

Upon signing Walker commented, 'It was an easy decision to stay here at Farsley Celtic. We have a great bunch of lads in the squad and the people around club are all class, so it's a great place to play football'

'I am looking forward to next season, for me it's always about just playing every week and trying to score or create as many goals as possible. As a group I feel we have a team who can step up to next level and compete with most teams and play the brand football we like to play'

'After speaking to Adam I was really impressed. I am already looking forward to pre-season and the friendlies and seeing how the new management team operate and implement their ideas'