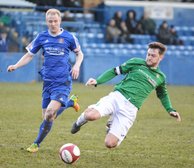 Farsley Celtic have received a massive boost with the news that last seasons top scorer and division player of the season, James Walshaw has agreed a deal with the club for 2017/18.

Walshaw bagged an impressive 50 goals in all competitions in the promotion season from just 44 starts for the club. He scored in both the semi final and final in the all important end of season play-offs, and also grabbed five match balls throughout the season with hat-tricks against Congleton, Tadcaster, Radcliffe, Tamworth and Ramsbottom.

New Manager Adam Lakeland is thrilled to have Walshaw on board for the upcoming campaign, 'We are absolutely delighted that James has put pen to paper on a deal this evening. The contribution that he made to this football club last season is simply unquestionable. To weigh in with that amount of goals is some achievement'

'He was a key player last season, and he is going to be again this coming campaign. I am really looking forward to working with him'

On signing Walshaw commented, 'I'm delighted to be staying at Farsley Celtic for another season after a successful season last year. Credit and thanks must go to John and Neil for the faith they showed in me'

'We are moving forward as a club and we don't want to stand still both on and off the pitch. After the appointment of Adam it didn't take long for us to sit down and have a chat. His enthusiasm for the game and his professionalism shone through immediately. I'm sure both him and Bettsy will leave no stone unturned in their preparation for the forthcoming season. The dressing room last year was a great place to be and was a major factor in my decision to resign for the club and I'm hoping most of the players will follow suit'

'Personally, last season was a successful one in terms of performances and goals. I will be doing my very best to prepare and to make sure this season is just as good, if not better than the last'